Things you didn't know but need to know about Naples/Italy

Pompeii: Nothing could 'ruin' our day!

Can you tell Sarah came up with that one?

For those of you reading this (if anyone is) I'm sure you would have heard of Pompeii- its located just across the bay from Naples, and is famous for all the wrong reasons. On the 24th August 79AD, the summit of Vesuvius exploded, burying Pompeii under 7 metres of earth, and wiping out most of its residents. Fast forward to now, and what you have is one of Naples' most visited tourist sites. On the day we visited, the 35 degree C heat had kept all but the hardcore history buffs away (and a dragged along Laura haha) so armed with a water bottle and suntan lotion, we set off to discover Pompeii. 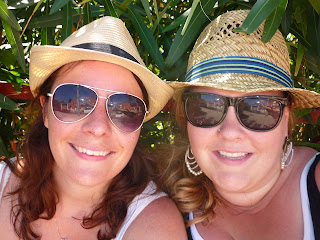 Now, we won't give you a history lecture (although I'm quite sure Sarah would love to), we'll let you look it up online instead. 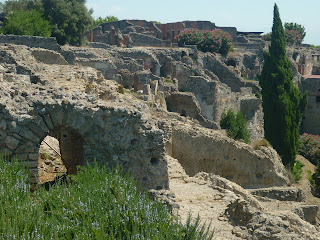 Straight from the train station, Sarah picked up a trusty guidebook, complete with free map, and became the tour guide for the day. Here's the thing with Pompeii- it doesn't matter how up to date the tourist map is, you can guarantee they will have excavated more buildings since it was printed, and therefore trying to follow a map will no doubt make you end up walking quite the distance. How do we know it wasn't just our map? Well, other than the ruins, the most common site at Pompeii are groups of people trying to decipher the maps.

So after a successful start, we ended up doing the highlight tour. We went through the list to find things we thought would be interesting (read: sex, gods, prostitution, food, baths) The Forum, the Temple of Jupiter, the House of Fawn, the Temple Baths, House of the Tragic Poet, House of the Gladiators, Large Theatre (creative name, right?), The Odeon, and finishing with the Ampitheatre and the brothel. We came across most of the other things on our tour (by chance and terrible signage) and in total we spent 5 hours immersing ourselves in the historic city. Well worth visiting, just make sure you take comfortable footwear (those streets weren't made for walking) and a ton of water. What they don't put in the guidebook is that this is a modern day exercise camp. 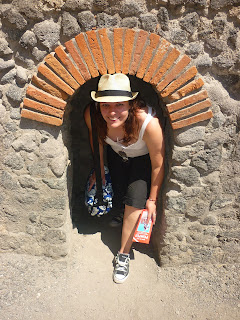 Upon returning to England, Sarah decided to take being a history nerd to the next level and engrossed herself in a 6 part BBC series about Pompeii. She had a whole day on her hands. They ended the series with a rather disturbing warning, which we feel is only fair to pass on- the volcano should erupt every 2000 years. The last eruption was 79AD- and the next one is due *dun, dun DUN*
Posted by Sarah & Laura Sarah + Laura at 22:07 4 comments:

Email ThisBlogThis!Share to TwitterShare to FacebookShare to Pinterest
Labels: Naples, Travel, Us, What We Do

So while in Naples, we went to see the ruins of Pompei- and the journey itself turned out to be an adventure of epic proportions.

The first thing to note is to get to Pompei, you need an early start. The second thing is that Italin bus conductors love to catch unsuspecting foreigners on their buses without tickets. Case in point: In London, you can buy tickets on the bus. So when there was no ticket machine at our bus stop, and no signs around explaining how to get a ticket, why wouldn't we assume we could get one on the bus? Well, assuming makes an ass out of u and me. We got on the bus, Euros in hand, and tried to pay the bus driver- he waved us on the bus, and to what we thought was the ticket machine. Laura attempted to feed notes into the machine to no avail, and we were still trying to figure out what to do next when two men got on, yelled 'Controller! Tickets!' and came right for us, flashing a badge. We tried quickly to explain to this very aggressive man that we were trying to buy tickets, but as we don't speak Italian and they didn't speak English, it was lost in translation. He then tried to get us to show him our passports- which we didn't have with us. Before we knew it, he had called the police and we were being shoved off the bus in the middle of the road to pay a 'penalite'. In retrospect, we think the bus driver made the controllers aware before they got on the bus that we were there. Luckily, we weren't the only ones duped- there was a family of 5 English people also arguing the point. We were told to pay a €41 fine EACH- ridiculous! We spent a good half an hour arguing with the policeman (who didn't speak English and was looking more and more sorry he was called to the scene) with the controller screaming at us in Italian the entire time. Sarah suggested we run for it... so we tried to sidle away slowly, but were caught. Thanks to Sarah's fantastic arguing skills (and Laura's expert puppy dog face) we got the fine down to €41 for the whole group- €20.50 instead of what would have been €82. A rip off, but the best was made of a bad situation. The single worst thing about it was that we saw the controller pocket the money we gave him!

A word to the wise- dont get on a bus without a ticket. And if you do, REFUSE to pay the fine- argue it down as low as possible.
Posted by Sarah & Laura Sarah + Laura at 22:15 1 comment:

Email ThisBlogThis!Share to TwitterShare to FacebookShare to Pinterest
Labels: Naples, Travel, What We Do
Location: London, UK Naples, Italy

If anyone ever tells you not to go to Naples, because it's dirty, mafia controlled, and dangerous, do not listen to them- we strongly advise you to go anyway. Laura actually had someone tell her she was likely to get mugged and raped if she didn't go in a big group- which was a tad scary considering she was just going with Sarah. We are happy to report no muggings, no rapings, no close calls (except an angry ticket controller on a bus, but we'll tell you about that later), we didn't feel 'in danger' at any point during our holiday! Like in any big city you need to keep your wits about you of course, but please don't let this stop you from visiting this amazing part of Italy- it's well worth going to.

We arrived early afternoon, armed with a slip of paper from one of our colleagues with the Italian phrasing of 'Please take us to Santa Lucia on the fixed tariff of 23 Euro', and got into a cab at the airport. We immediately noticed how hot and humid it was, 30 degrees Celsius, and how manic the road systems were. Laura tried her hand at speaking the phrase we were given to the cab driver, who obviously had no idea what she was saying, so we resorted to handing over the piece of paper with the phrase on it. Three or so near-death experiences and one angry cab driver later, we arrived at Santa Lucia, and our beautiful hotel.

If you do go to Naples, definitely stay in the Royal Continental Napoli (www.royalcontinental.it/). It is stunning, inside and out. From the very beginning, the staff could not have been more helpful, and within 10 minutes we were being shown to our room. As the door was opened by our overly-helpful porter, we were taken aback by the beautiful view of the Castle d'Ovo and surrounding sea. After a good few minutes of jumping around overly-excited, Sarah was ready to hit the pool, and had her swimsuit on in record time. Laura wanted to stay in the air conditioning, but went along anyway. The pool is on the roof- bliss!!

After a refreshing night's sleep, we donned our tourist gear and followed our map into the historic city centre. One of the amazing things about Naples is that whatever route you take, you happen upon all sorts of unusual sites- things you didn't know you wanted to see, but are glad you did. Naples is a great mix of old windy streets and magnificent grand buildings. You could easily fill a week wandering around and enjoying the sites. Thankfully, we had done some training for walking up hills the weekend before in Brighton, so this place was a piece of cake! 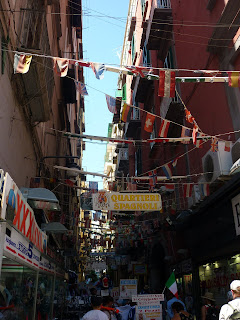 First we happened upon 'Christmas Alley'- the tourist information centre had told us it was in a completely different place, but we found ourselves in a street chock-a-block with nativity figurines (who knew, this is where they originated?!) of religious significance, and pop culture icons. Around the corner happened to be the underground Napoli tour- a bargain at €7. Our tour guide, Alex, made the 2 hours fly by with interesting facts, antidotes (and atheist jokes, to our amusement and the rest of the group's bewilderment). We got to see the remains of a Roman theatre (which is in a Napolian apartment's basement!) and early Greek and Roman aqueducts. If you got to Naples, definitely do this tour!!


Around Naples you will get used to two common icons- the chili, a sign of good luck, and the Pulcinella- a traditional folklore character who is mischevious, and always hungry- which is why he can be seen at every pizzeria you come across. 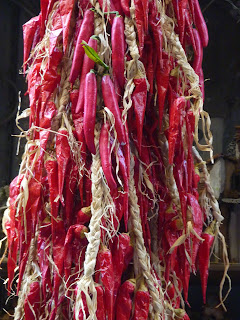 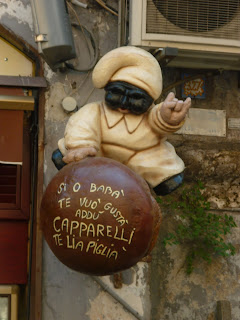 In contrast to the hustle and bustle you find in the city, you can take a walk to the waterfront at Santa Lucia, (20 minutes walk from city centre, but right outside your door if you are at the Royal Continental!) and endulge in the luxury of sun, sea and food. Oh, and the amazing view of Mt. Vesuvius. The locals spend a few hours every day perched on rocks topping up their tans, and the atmosphere is magical- but its at night that this place comes alive. Amongst the chatter of the restaurants, there is an air of romance and relaxation that is hard to compare. We enjoyed listening to the street musicians playing traditional Italian music- there is nothing quite like listening to 'That's amore!' as the sun sets. There are too many good restaurants to choose from, but the highlight for us was watching the moon rise with an eerie red hue, over Mt. Vesuvius, with a gelato in hand. We recommend La Nuit, on the waterfront- just don't sit in the restaurant. Trust us.

In summary, Naples is really a city for everyone- whether you're a sun-seeking history buff like Sarah, or a cuisine connoisseur who likes to immerse yourself in the culture like Laura.