Welcome, Goodbye and Hope To See You Again!

Why hello there, thanks for stopping by!

This will be our last and final post on our SarahplusLaura home, we've moved! Not too far I might add but to somewhere with a little more space, freedom to be ourselves and we think somewhere a little more fitting.

So come and find us at: 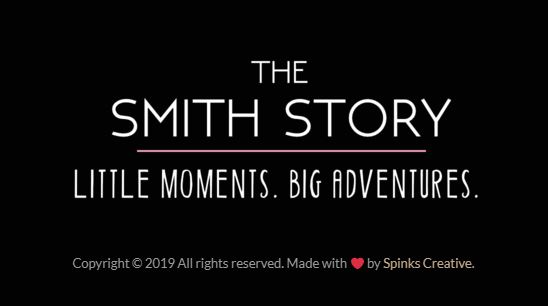 With the arrival of Annabelle we realised that 'Sarah plus Laura' was no longer our identifier, we are Sarah plus Laura, plus Annabelle plus Bisbee.....it's not quite so catchy. Our new name gives us space to grow.....

If you want to follow along with our new adventures, see where we are now or check out our latest content just click here: http://www.thesmithstory.co.uk, we'd love to see you!

We have also updated all our social media accounts to The Smith Story so come say hi on whatever account you are using.

SarahplusLaura has given us so much, thank you for being part of it. For reading, for sharing your comments and thoughts, for the emails, the stories - for it all. We will be migrating content over to The Smith Story gradually so it won't all be lost.

We will still be at sarahpluslaura@gmail.com if you have any questions!
Posted by Sarah & Laura Sarah + Laura at 18:00 No comments:

Review: Buckt - Birmingham and Beyond!

There are many things we love but high up on our list are:
So anything that allows us to do any of these things, or a combination of these things is something we can get behind. Buckt is one of those things!

We've been invited to try out the subscription again, this time our box includes: A 20-20 cricket game, swimming in a quarry, trying (or retrying in our case) Subway sandwiches, a tour of Birmingham's Coffin Works AND taking on THE MONSTER - the worlds largest inflatable assault course.

We actually started with this activity and we may have made an error.....we are aching! But we had so much fun. Check out our Instagram stories for all the action!

Buckt is a great concept for so many reasons but a major thing for us is the opportunity to find and do activities that we have never heard about, in our own city. We would have never considered getting tickets for The Monster but we would have missed out. Being big kids for an afternoon was liberating. We don't often get out as a couple and of we do it's for dinner, it's not to do something out of our comfort zone or something as ridiculous as sliding down 18 metre inflatable slides, lounging in an inflatable Unicorn ball pond or climbing 8ft vertical walls.


The other amazing thing about Buckt is the value. It's £25 for a two people box and The Monster would have been £25 per person!!! It's also great value if you want to take friends along to the activity - they were offering friends of the Buckt subscriber The Monster tickets at £17.50!

We can't get a meal for two for £25 let alone 5 activities if we were left to our own devices.

When we arrived at the NEC we followed signs to 'The Monster' and followed the flow of sport clothes wearing people into the venue. The queuing took 10 minutes and then before we knew it we were in a massive hall converted into a party. The music was pumping, the food stalls smelt amazing and The Monster was imposing. 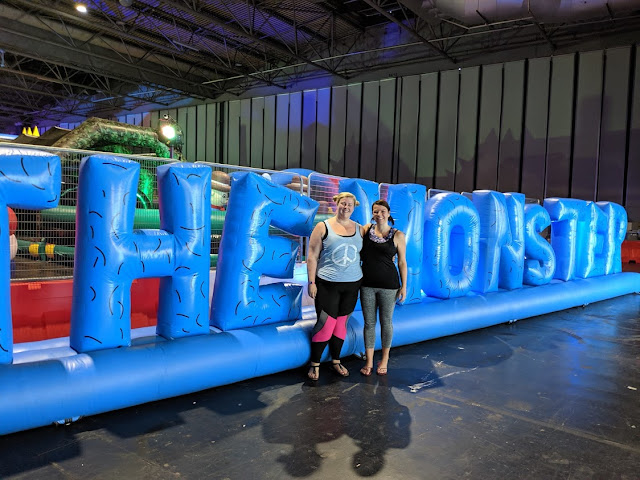 As we walked in we spotted the beer pong tables set up, a giant bouncy castle and a giant inflatable Unicorn jam-packed with balls. A DJ booth and stage was welcoming people and at the back of the hall was a free cloakroom where we could leave the belongings we didn't want to lose on the assault course. If you time it right they have drag queen karaoke, boozy bingo and lots of other things going on. 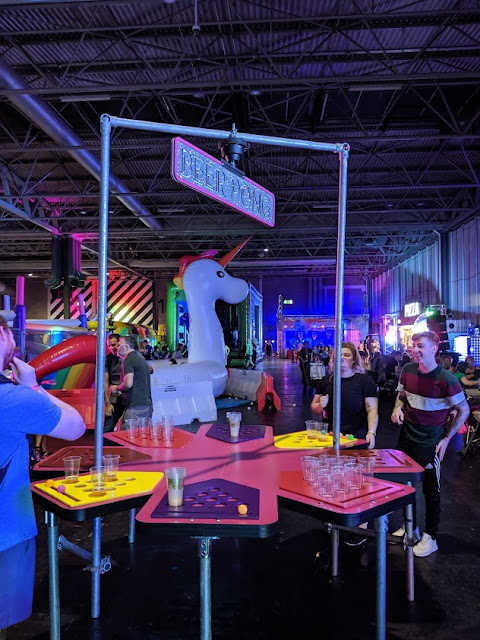 They also have family friendly sessions on offer earlier in the day.

Walking towards the start we both took a deep breath and joined in with the warm up. There had been a bottle neck created on The Monster so we were being held for 5 minutes - not ideal as we could see what was ahead for the entire time. When the siren did sound for us to start it was intense. You run in through the mouth in groups of 6 and are straight into the obstacles. 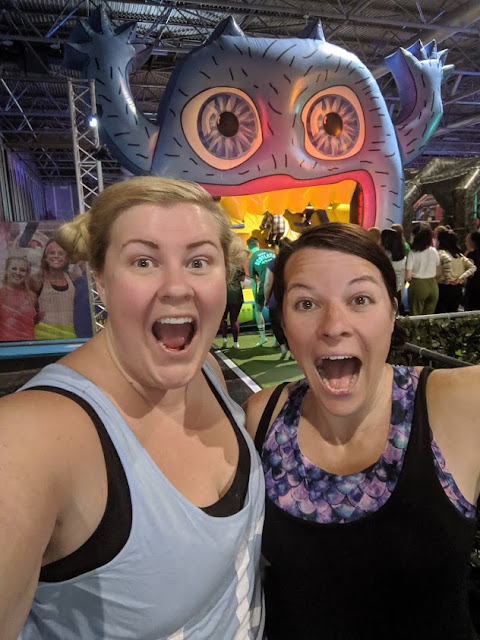 The course has you going over, under, round, through, up, down you name in you will do it. From hurdling inflatable fences to battling through rings, sliding down slides and climbing walls you will use every muscle in your body. The wall itself is a feat not everyone achieves. They even have staff there to give you an extra boost at the end as the top foot rungs are slippy and require every bit of upper body strength. I managed it in my first attempt and helped a few other girls up as Laura - dutifully and very Britishly queued! - when it was her turn she did it in two and I was so proud. She could have easily given up but she took a deep breath and before I could get a video she was up and over and on to the next. My wife is a warrior! 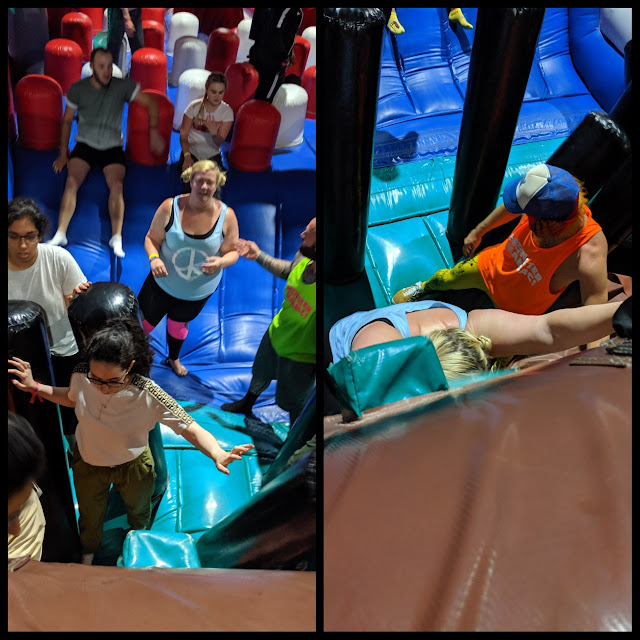 It took us half an hour to get around the course and by the end we were exhausted, sweaty and very proud. When we first saw what we had to do we were intimidated, when we finished we realised just how capable we were and best of all we did it together, as a team. It was invigorating. 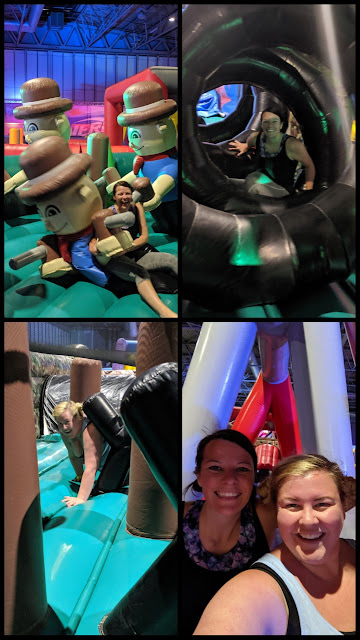 We finished with a bounce for fun on the giant castle and rested our weary bodies in the ball pond before summoning the strength we had left to get us back to the car and into a warm bath. 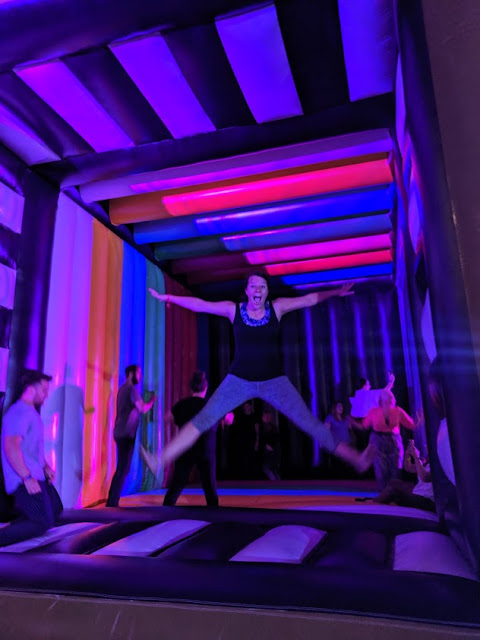 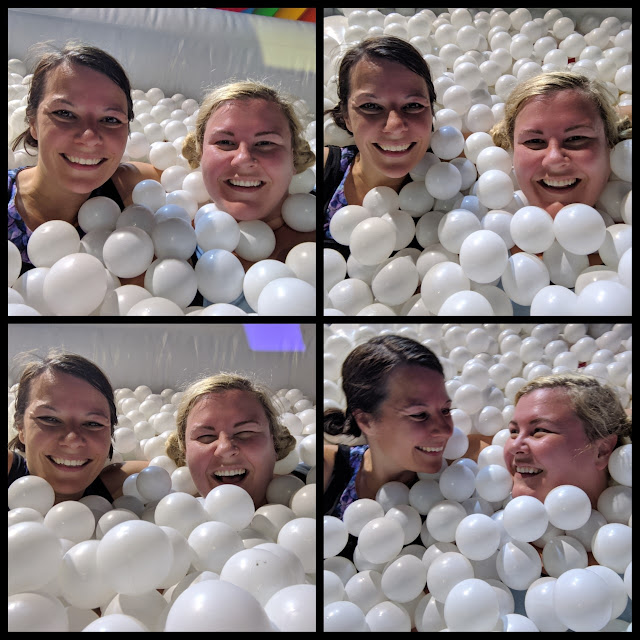 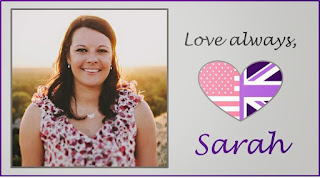 Baby Blogging: The Truth About Sending a Baby To Daycare!

Growing up my Mum was a childminder; it meant I didn't leave my Mum's side - other than for afternoons at nursery school - until I officially started school. Laura had a stay at home Mum. We were lucky to have a lot of our Mums' attentions for our childhoods and so when it came to having our own child we knew our preference was to have one of us stay home.

That preference is changing though. It didn't change overnight but it did change when we talked about our reality. The reality of living on one salary. The reality of saving for future children. We just so happened to see a new daycare being built on the corner of our street and then visiting that day care shifted the preference too. And so we went from being set on one of us being a stay at home Mum immediately to factoring day care into our plans (although likely not forever, as we still plan on Laura being a SAHM hopefully next year!).

We both agreed that full time day care wasn't something we wanted but we agreed that some time at day care could be beneficial for Annabelle.

For us we could not have made a better decision. 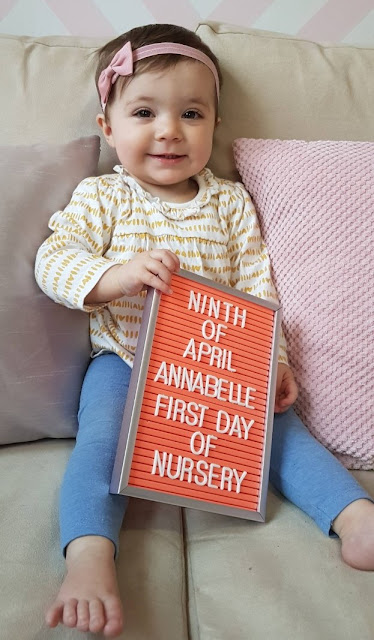 As I write this blog I find it shocking that I have been back at pretty much full time work for 4 months (I shared my thought on the end of maternity leave in this post). I am fortunate enough to have enough annual leave to take two or three Mondays off a month to look after Annabelle this year. My Mum has her two days per week and she is in day care two days.

We're pleasantly surprised at how far we have come as a family and how much daycare has helped so many parts of our lives. That includes: 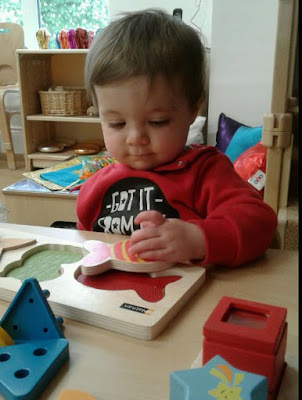 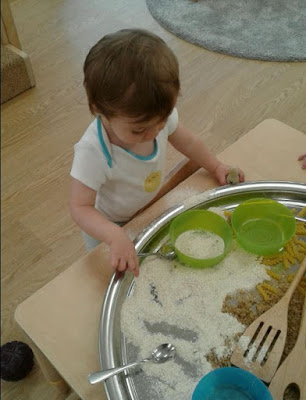 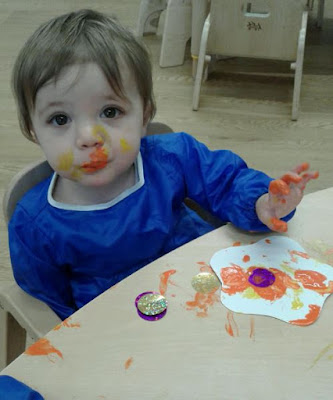 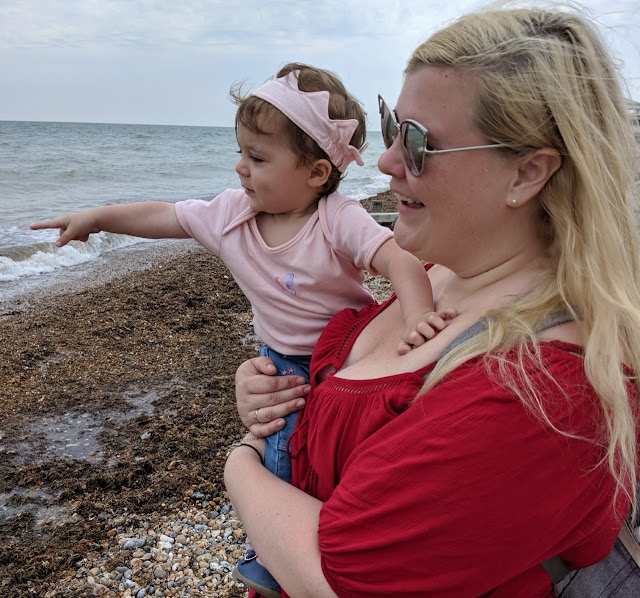 At first Annabelle would come home exhausted, her naps there weren't as long as at home, but now she comes home full of smiles and we have three wonderful hours together. She has nap time there sorted and often sleeps longer there than at home.

It is amazing. We have mentioned before that we get video access and that does make a big difference but we also really like the reviews we get that score her development against the Early Years Foundation Stages. We also like term summaries that share things like:

'Annabelle has a good relationship with adults and her peers. She has started to engage more in activities and play alongside her peers, sometimes copying what they do.'

And the observations we get are great. They are pictures with descriptions of what she has been doing.

All in all we have had a very positive day care experience and we hope it continues. The fact that the day care is a 3 minute walk away makes it feel like she's not far away and we can get to her quickly should we ever need to. 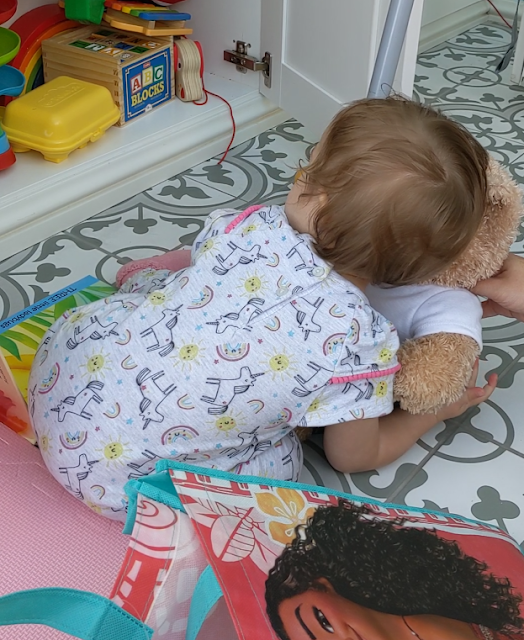 Have you put your child in nursery/daycare, and what are your experiences with it?

You may have seen our last post on Day Trips in the Midlands, if not see here.

South:
Glastonbury & Stonehenge: If you love history and impressive sites then heading south could be your thing. Glastonbury is quaint but full of everything you need to entertain you for an afternoon and Stonehenge is just as majestic as you expect. The area is perfect for stretching your legs and enjoying impressive sights! To read more click here. 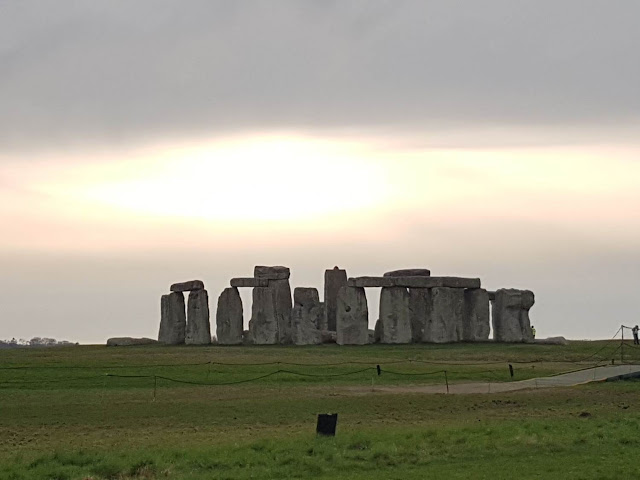 Brighton: We do love to be beside the seaside and this town has so much to offer come rain or shine, if you haven't been we would suggest you do. For a day, a weekend or a week - you'll always find something to do. See what we got up to here.

Cambridge: Pretty, interesting and jam-packed with history this city is worth adding to your to-do list. If you go for the day you can focus on the highlights - punting, Universities, pretty streets to explore but if you go for the weekend this place has so much to offer you'll never get bored! See what we did here. 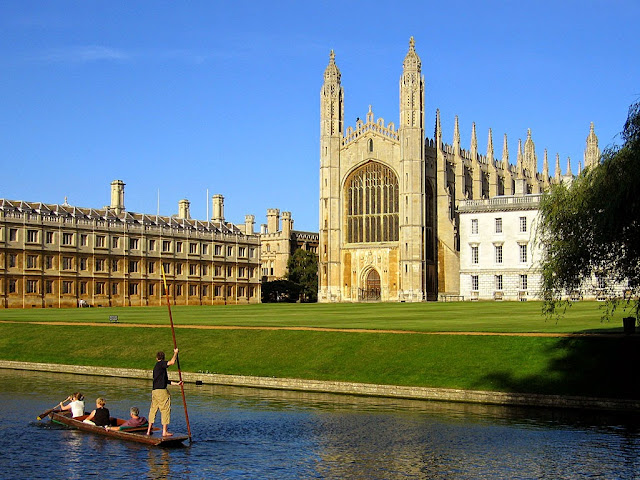 Newquay: If you have time to head to the south of England you have so much beautiful coast to choose from you could easily spend weeks exploring. However if you need to pick a destination then Newquay should be on the to-do list. With plenty of sandy beaches, activities you can do in and out of the rain and so many places to explore here's what we got up to. 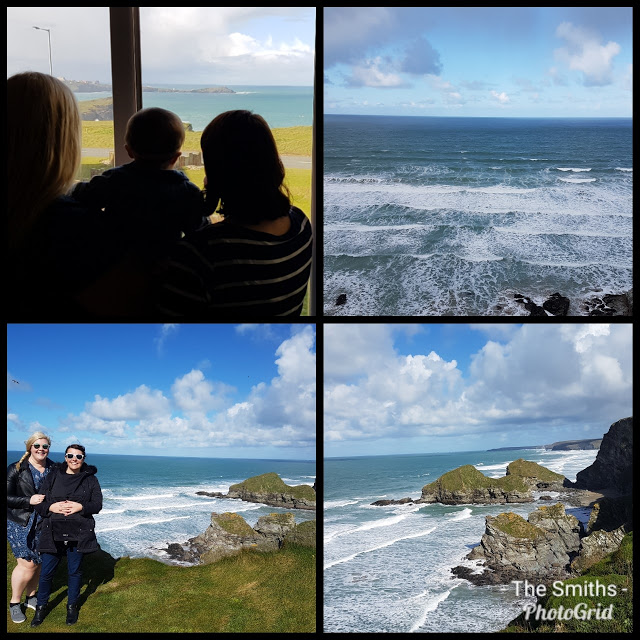 Devon: The English Riveria, located in the South West and never more than 25 miles from a beach this place is perfect for families with dogs or people who like walks. The scenery is stunning and there are plenty of villages and places to explore. South Milton was a highlight as it had a dog friendly beach all year round, for other highlights check here.

Sudbury: A chance to explore Suffolk will take you back in time, with quaint villages and old timey places to discover. Another great place to take dogs and kids you can make a base from any of the villages and spend your time picking the next place on your to-do list. Click here's what we got up to.