Welcome to our blog! You join us just over midway through 2011- and at an interesting time in our lives. To explain, we arrived back in London after a year traveling and working in Australia. At this point, Sarah has just quit her job, and Laura is working her third consecutive month at a new job- in Victoria, by Buckingham Palace! But not in Buckingham Palace.

Yesterday, we woke up and decided to take a drive to re-live one of Sarah's childhood memories. Her Dad used to be a police officer, and about 20 years ago he was called to break up a fight at a motorbike cafe called Harleys. Upon arrival, the fight was over, so he decided to sit down and have a meal. A meal that little has compared to since. If you watch 'How I Met Your Mother', this story is very much like the episode where Marshall eats the best burger he's ever had- and then he can't ever find the restaurant again. And if you haven't watched that episode, you are missing out, but here's the synopsis:

Sarah's dad returned home to share his discovery of this amazing cafe with the family, and set about planning a trip to visit it again. Only, it wasn't quite that simple. After numerous failed attempts to find the cafe again, he had almost given up when three years later he randomly happened upon it again! This time, the location was better noted, so the next time his family set out to find it, it was easier found. See, the issue is, for those who don't know, English countryside is a bit of a maze- lots of small windy roads, with little in the way of signage, and a habit of all looking the same- its incredibly easy to get yourself lost if you don't know exactly where you're going. The term 'A country mile' is made for these parts, a normal mile should take one minute (at 60mph) but a country mile will take near on 10 minutes, and you'll be lucky to get past 25mph!

So anyway, once the cafe was found, her family took everyone who visited to it. The last visit was at the start of 2000- and since then, it has remained a fond memory (and a bit of legend). Fast forward 11 years, and we woke up, decided it would be a nice day for a drive, and set off in search of the cafe. A little bit of research on various biker forums, brought up the name 'H Cafe', set in the countryside between Oxford and Wallingford, and with a history of biker gatherings- this sounded like the place. With modern technology, we scoped out the route and set about finding it.

An hour and a half and only 2 wrong turns later (gotta love modern technology), we arrived (in a car) at the H Cafe. After coaxing a nervous Laura out of the car, we crossed the motorbike filled parking lot and went inside. All the stares from leather clad bearded bikers let us know we were not the regular customer! We each ordered a fry up, and lets just say, it lived up to its reputation! Well worth the drive, well worth the stares, it was delicious, and we can't wait to go back.

Afterwards, we had a quick gander at all the bikes- and decided maybe we should get one when we retire- if we can find some hairy bikers to drive us around, that is! 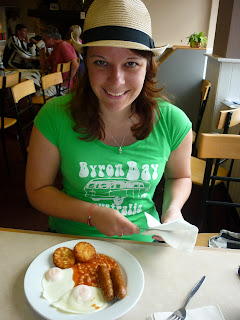