Sunday the 14th of August, we were lucky enough to witness the road cycling test event for the London Olympics 2012, as it ran right through our neighborhood! In the spirit of competitive cycling, this post will be written the way the race went. Short, sharp bursts followed by long pauses and a few stragglers.

We arrived at precisely 12:10 and found our way to the perfect viewing spot. 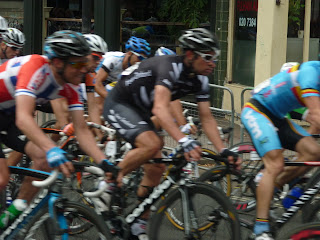 In shock, we weren't sure whether to stay or go. 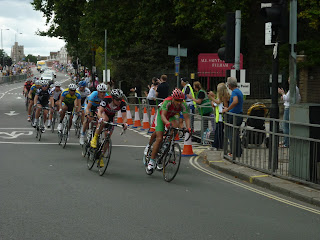 But not us hard-core cycling fans.

We stayed long enough to witness the battle for the losing spot by two Irishmen and a German. 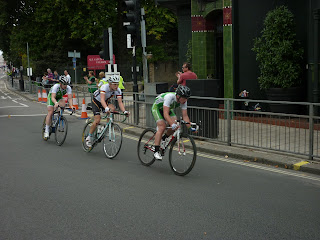 Bring on the Olympics!

A Little Seaside PRIDE in Brighton!

On Saturday, we woke up early and drove from London down to the lovely beach side town of Brighton. We are lucky enough to have friends living down there, Sarah's old housemate W and his girlfriend. We parked up at theirs (Brighton is more than a little hilly- and it seems they live at the top of the highest hill) and descended into the town centre to wait for the Pride parade to begin! 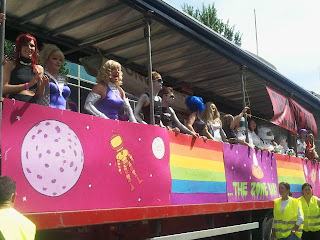 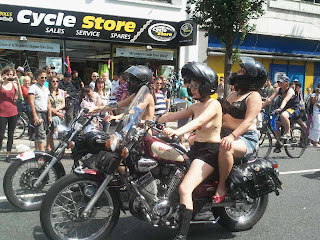 The weather forecast all week had been rain in the morning and cloud all afternoon, but thanks to the glitter gods of gay ole' Brighton, as we arrived the clouds broke and the sun shone down on all of us. It was much better, but posed a problem- we had left our sunglasses, and sunscreen, back in London! Sarah's precious eyes couldn't possibly last without sunglasses (retina damage and wrinkles from squinting, you know) so we had to power walk to find the nearest Primark- a good 20 minute jog up and down hills, to find some sunglasses. Once we had purchased eye protection, we speed-walked the 20 minutes back to our starting spot, in order to beat the already started parade.

Once we picked the perfect spot, W came and met us to watch the parade. Immediately I noticed differences between my beloved Pride London and Brighton's Pride. It was just so relaxed there, busy but not suffocatingly so, and everyone seemed so....free. What I'm trying to say is, there was a lot of nudity. Laura had never actually seen ass-less leather chaps without something on underneath.... and she's not sure she needed to. However, all asses aside, it was a great parade, and to our delight, W got hit on! He was recruited into the 'Bear pack', and asked to grow a beard! I don't think he expected that when he came down to watch the parade with us- but it provided us with plenty of hilarious material for the rest of the day. 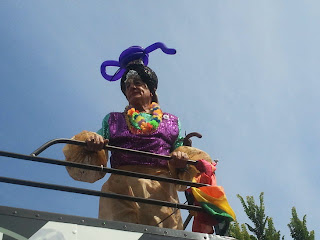 Post parade, we met up with W's girlfriend, and we went down to the beach for fish, chips, and a Swedish cider. We had a lovely afternoon, bought some rock, and then had to climb the massive hill back to our car (ugh) so we could head home. To Laura's dismay, she came away from the day with a terrible sunburn- somehow managed to be the only one to get any colour on the day, and now has very awkward strap marks. 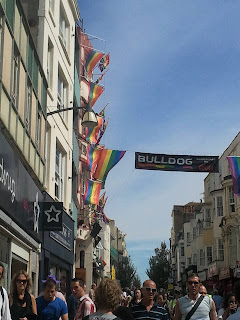 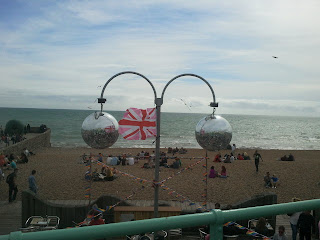 Email ThisBlogThis!Share to TwitterShare to FacebookShare to Pinterest
Labels: lgbt, UK, Us, What We Do
Location: London, UK Brighton, Brighton and Hove, UK

As this is a blog about the things we do, it's only fair that we record the events that affect what we do, good and bad. We are writing this 4 days after the last reported riot in London. You've probably seen pictures on the news, as it was reported worldwide, that local youths decided to riot and loot certain areas of London over the last week. One of the reasons this affected us is Sarah used to live near Clapham Junction, and it is the area we do a great deal of our shopping. On Monday, 8th August 2011, it fell victim to mindless thugs, who selfishly attacked and looted local stores, and set them on fire.

The riots themselves started in East London (like all bad things do) because a gangster was killed by police the previous Thursday- a peaceful protest erupted into looting and trashing the streets of Tottenham, but the worst bit is, by the time Clapham Junction was hit, teens were finding any excuse to riot, and for no real reason at all except 'who says no to free stuff'. The sad result was, among many other horrible things, the loss of our local fancy dress shop. The kids broke in and stole masks to hide their identities, before burning up the place- completely wiping out the entire store, and the flats above it. 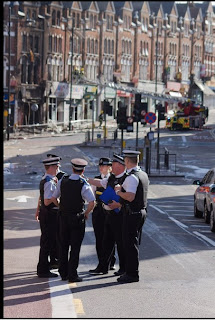 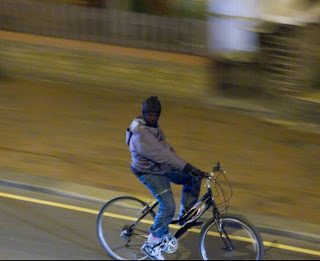 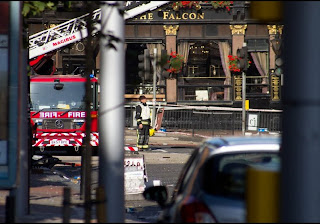 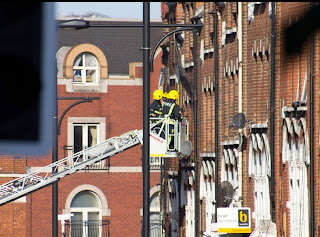 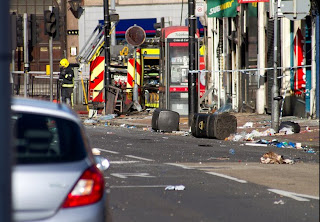 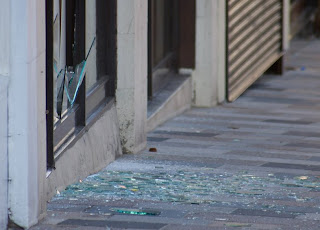 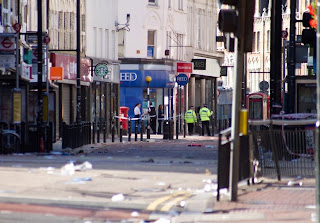 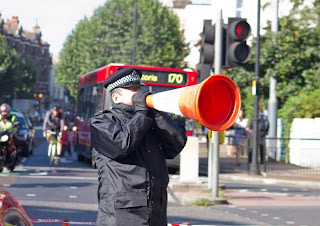 Because of these stupid kids, we've been unable to visit Clapham Junction for almost a week, but have been following the subsequent clean up of the area via friends' photos who still live there. A group called the Riot Wombles (an old English kid's show about environmentally friendly cute rat things) have been cleaning up the affected areas- the communities have been coming together to show strength over the mindless minority. 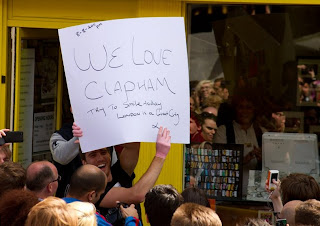 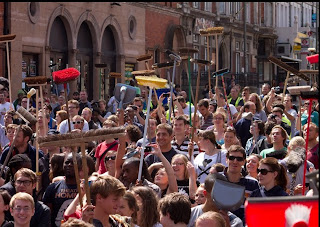 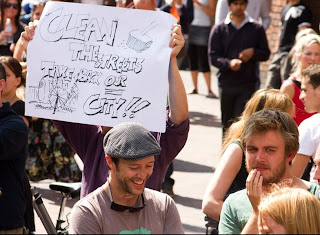 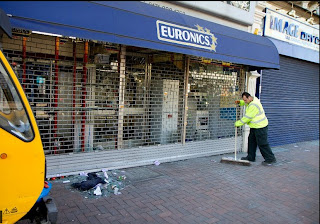 Since last week, we've heard sirens pretty non-stop around London. Work lunch breaks are spent watching police vans go by, and the occasional helicopter. Normally thriving businesses have been boarded up- making our usually nice area a bit ghetto looking, and leaving a good deal of London looking like derelict neighborhoods. Lots of small businesses have lost everything- it seems so mindless to destroy the areas you live in and love. We can only hope it's stopped for good, and we can all go back to our normal lives- and the young culprits can be caught and jailed, and scared enough never to do something like this again.
Posted by Sarah & Laura Sarah + Laura at 22:59 1 comment:

Rastafari!! ...at the One Love Peace Festival

Sunday started like any other weekend day- we were late for something. This day we were running late for the One Love Peace Festival, an 11 hour reggae concert at Wembley (Laura's bright idea, of course) to raise awareness for 'Not Another Drop' campaign to stop gun and knife crime. To be fair, we planned to be a few hours late, because the thought of standing for all that time was not appealing. But we ended up 4 hours late!

We made our way to Wembley Arena, two bottles of cider safely stowed in our handbags for pre-concert consumption, and when we arrived, we remembered something that would make our parents proud, but is also a bit disturbing- we don't own a bottle opener. (Hey, diet coke comes in cans!) We set about making like chavs (when in Rome, right?) and attempting to open our cider bottles on a metal protective shop front- but no sooner had we positioned the cap, that an old non-English-speaking man in his Sunday best stepped in to teach us how it was done. Or so he thought. It proved harder than he expected, and resulted in him spraying half a bottle of apple and blackcurrant Swedish cider all over himself, and over half of Sarah. We felt bad, and he gave us one pound to make up for it, but Sarah sprinted to the nearest street sign and opened her bottle like the chavvy English teenager she once was. Such a pro.

The festival itself was dark, like really dark, and the floor was really sticky. The first few acts we watched were good old Jamaican reggae bands, and they kind of all blended together in a mess of hemp and dreadlocks.  We loosened up after that, and really enjoyed swaying along with the music, and in typical 'us' fashion, mimicking the ridiculous dance moves we saw around us. Before long, we were hungry, so ventured to the food counter- where we waited in line for near on half an hour to be told at the front they had run out of chicken, fish, and veggie burgers. Ridiculous, as it was only 6:30pm!! Luckily from there we found an exit, and were able to go get a meal, and be back in time for the main acts of the evening.

Until that point, the festival had been alright- enjoyable, but Laura felt a tad guilty for dragging Sarah to yet another Bar Rumba-esque experience, and Sarah was less than tactful in her displeasure at being there. Awkward. But then, something magical happened. And that something, was named Busta Rhymes.

Ohmygod. He was amazing. We knew quite a few songs with Busta in them from over the years, but had little expectation for his performance- and he completely blew us away. He slammed all of his greatest hits in his short set time, he was jumping around, doing weird dances, and his high-speed rapping- well, Laura was in love. Here's his rap to 'Look At Me Now', his newest hit, it was easily the top performance of the evening, and has got us looking into going to a Busta Rhymes concert.


After our darling Mr. Rhymes came Sean Paul (our dear friend Kate Paul's alleged cousin), who, along with a new haircut, also gave a good performance- his time was cut short due to the concert overrunning, so he was a bit disoriented, but still gave it his all and performed lots of songs we don't like when they are overplayed on the radio, but loved live.

And finally, the cherry on our reggae feast, on came none other than good old Shaggy. Lets just say, age has been kind to him. He is still as hot, still as awesome, and still as cringe-worthy as he was in the yellow CD Laura and her brother had as a child. Don't mind the awkward singing/yelling of some over-excited American who was happy to not be the only one who wanted to hear 'It Wasn't Me' (she thought she only liked it because she's that white), Shaggy was skipping, thrusting and limbo-ing like a pro. It really was a fantastic performance.

Such a turnaround!! The concert was incredible, we had a great time, and it turned from 'When is it over?' to 'WE'VE GOT TO COME BACK NEXT YEAR!!' But next year, we will probably reserve seats and bring sandwiches.