The Smith Catch Up V4

I don't even know where to start this blog post, there is so much that has happened in the last 48 hours let alone the week. I can tell you one thing though I am ready for a weekend of sleep and recuperation.

While last week was pretty quiet, we were having the house painted top to bottom on the inside so I spent my time working from home in a state of constant movement, partly to get out of the way and partly to make sure I wasn't in a paint smelling room for too long. The end result of the painting is AMAZING. Our house feels all clean and fresh and new and looks better than it did when we moved in 3 years ago. 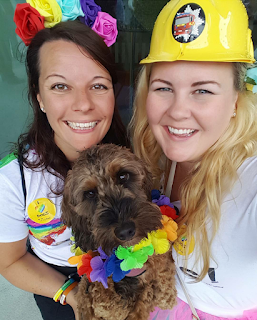 The weekend was really where we started to step up the activities though. On Saturday morning we drove the two and a half hours north to go to Manchester Pride. We arrived just in time to park the car and make a brisk walk of it to get to the parade route. Unlike last year - when we arrived early and found the perfect viewing point- this year we had to find a space and make it work.

The city was packed. We managed to squeeze our way in and stand beside two guys who were very much not into the parade spirit. Thankfully everyone else around them was so we could still get into the spirit. At the end of what was a great parade we followed the floats through the city centre. It was a great way to discover different parts of the city and meet some lovely people.

British summer weather decided that after a beautiful morning the afternoon needed a bit of rain so we had to make a dive for cover, it was at this point we decided to catch up on social media and found one of our good friends (from Girl eats Sheffield) had given us a lunch suggestion - Almost Famous Burgers. 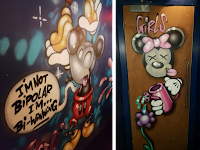 We made a reservation and after dropping the dog at the car we were seated. The menu made it difficult to pick just one thing but we were on a mission to get the Big Gay Burger and that is exactly what we did...oh plus waffle fries covered in maple syrup (so so so good) and a strawberry pop tart milkshake (tasted a lot like drinking strawberry sauce). The burger itself was really juicy and more than enough to share. It was a great recommendation and delicious experience. Shame the Big Gay burger is a Pride weekend special.

Well fed and re-energized we headed back to the car and made the 90 minute drive towards Sheffield. The route took us through the stunning peak district and while the roads were hairy at times the scenery was spectacular. The rain followed us most of the way but by the time Sheffield was in sight the sun was reappearing.

Arriving at our destination we were greeted by our fav ladies and their handsome pup Otis. Saturday night was sorted - whats more they were preparing a Turkish/Greek feast of lamb, chicken, home-made hummus and tzaski. Delicious.

Rolling into bed that night we were fast asleep before we could check out the days photos, our usual routine!

The great nights sleep was exactly what was needed ahead of a jam-packed Sunday. Our plan was to find all 58 elephants in the herd of Sheffield. Sheffield Children's hospital had asked local artists and companies to design elephants and they were placed in open spaces and parks across the city.

It actually took us two days in total as we and the dogs were exhausted after the 6.5 miles walked on the first day we called time at 6pm. Plus we had dinner reservations at SMOKE which were much needed. SMOKE is an industrial US-style BBQ restaurant that serves a LOT of delicious meat! Oh an cocktail reservation at a cute cocktail lounge that we also had to make on Sunday evening.

In completing the trail I learnt the following about Sheffield:


And to top it all off with the app you could check each elephant off using the QR code and unlock rewards including discount codes and treats from vendors across the city. We hadn't realised that at the start but it worked out really well for us as there was a discount code for SMOKE and Our Cow Molly - both stops we planned to make anyway.

After finishing the final 10 elephants we had to pack up and head home for work - sad times.

Even sadder was Laura having to have a tooth out on Tuesday afternoon. The plan had been to have the procedure done on Friday but we ended up having to wait until Tuesday which was probably just as well. The tooth did not want to leave of it's own free will and ended up splitting. That led to a trip to the dental hospital on Wednesday. We spent 6 hours there, first getting a further check up, then x-rays and finally the surgery. It involved forceps, huge needles and stitches and WAY too much information about what was going on. I'm queasy at the best of times but having bit hit by a flying tooth and watching the amount of blood leaving my poor wife's mouth makes me never want to see anyone I love go through anything like that ever again.

An evening of TLC had Laura feeling better and even though I felt bad leaving to play netball the exercise was a good way to put the day out of my mind. We won too.

Today I have been in Glasgow and Laura has been back at work with painkillers although I think both of us would have rather spent the day snuggled up in bed. Ah well 1 more day and it's the weekend.

Have you got any plans? 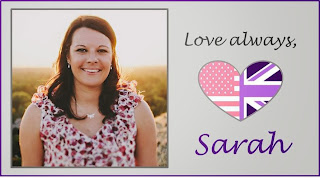 Email ThisBlogThis!Share to TwitterShare to FacebookShare to Pinterest
Labels: The Wife Life